An Interview with Dan Darling 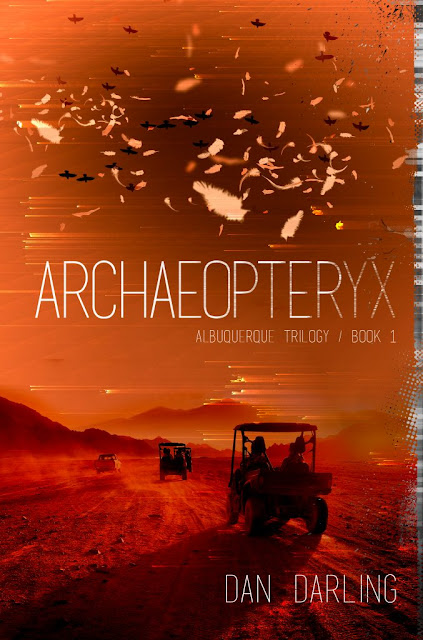 John Stick, zoo keeper and giant, just wants to sit alone in a dark room with his pet tarantula. However, when ten thousand birds fall dead from the New Mexican sky, the woman he loves, an ornithologist with severe facial deformity, begs him to decipher the cause. He grudgingly agrees, a decision that plunges him into a tangle of weirdness as old as the American Southwest. Stick’s investigation reveals that the birds’ mass death is an offshoot of a much larger conflict. On one side, the Good Friends, an underground railroad for undocumented immigrants, wants Stick to oust the man they believe responsible for killing the birds and persecuting immigrants. This same man leads The Minutemen Militia, which covets Stick’s expertise in handling their genetically mutated immigrant-tracking monsters. Meanwhile, a beautiful animal theologian tries to seduce Stick into believing his existence is key to balancing an off-kilter universe. Shady characters whisper of chupacabras loose in the desert. The exsanguinated corpses of strange beasts begin to turn up, some of them Stick’s close pals. At the center of it all lurks an enigmatic antagonist who, so they say, has harnessed the power of God in an ancient hot springs and is using it to herald doomsday. Stick’s journey upends his stable life, shakes apart his fragile relationships, and sets him on a collision course with his family’s secret ancestry. Ultimately, as chupacabra-like monsters, Minutemen, and Good Friends head toward a final showdown, Stick must make a hard choice about his own identity and values.


Archaeopteryx by Dan Darling is an ambitious book: the scope of the story, the seriousness of the themes, and the melding of disparate genres bring to mind similarly ambitious postmodern efforts by Pynchon or Wallace. But the comparisons end there because Archaeopteryx feels sui generis: it’s a work of hard-boiled magical realism that never loses sight of real-world stakes. It’s a detective story that explores the impossible (vis a vis the corrupting limits of human greed and hubris) while staying profoundly indebted to the spectacular and mundane particulars of place: the cities, towns, dead-ends, mountains, deserts, plants, and animals of New Mexico suffuse this book and the lives of its characters. Dust, sand, and sun figure into the narrative as much as the ulterior motivations of its characters who struggle to find answers or just peace of mind. Even as Archaeopteryx leads us down the dark, plot-driven alleys of detective fiction (who or what killed the birds? Why? And how is that related to what follows and who can be trusted to provide answers? And what's up with all these exsanguinated animal carcasses?), it is also an unsettling meditation on the evils of human nature.

Muskeg talked with Dan Darling about Archaeopteryx and what’s in store for John Stick and his pet tarantula. This interview took place in March 2018.

Given its huge scope—it takes in so much, pulling from so many places and literary traditions—we’re interested in the genesis of this book. Where did the initial idea come from, and how much did it change from start to finish?

I originally wrote the book as part of my graduate dissertation, Blood Heist. The story followed John Stick and his best friend Spartacus Rex as they literally robbed a blood bank in an effort to sell the blood on the Mexican black market. Once I finished my MFA, I re-wrote the entire novel with the same protagonist and a few other similar characters but with a totally different story, point of view, and style. The revision sprung from an inexplicable mass bird death in Arkansas that I’d read about many years before. I transplanted that event to New Mexico and let the protagonist and the event lead me through a fresh story. So, it changed drastically.

As a native of Albuquerque, NM, was it important to you to portray that city and its surroundings in a certain way? How much did you fictionalize it to serve the story? It’s obvious that your knowledge and (dare we say) affection run deep.

I want to be the Salman Rushdie of Albuquerque. It’s my hometown. It’s the belly-button of New Mexico and a nexus of postcolonial hell. But it’s also heavenly: the skies are so blue they’ll break your heart. The mountains are so purple and majestic that they’d make President James K. Polk declare war to conquer them (which he did). I feel a deep conflicted affection for the place. I did fictionalize aspects of it, but otherwise tried to capture Albuquerque’s soul as loyally as possible. I did extensive research in books and on foot into the natural elements of the landscape, geography, and wildlife. I also tried to make the routes of the characters drivable—my in-laws did a driving tour of locations from the book, including my childhood home, which appears in the novel.

At the same time that I attempted to capture the essence and details of Albuquerque and New Mexico, I compiled much of the conflict that has to do with immigration from across the Southwest. Texas, California, and Arizona have much more contentious relationships with migrants from the borderlands. I transplanted them to New Mexico because I wanted to dramatize the injustice migrants face—it seemed timely. Part of a writer’s job is to scream into the face of tyranny. In our case, tyranny is orange, a chronic liar, and loves to cheat on wives. Also, even though New Mexico doesn’t see as much migrant traffic across its southern border, my state has suffered a long history of tug-of-war between colonial powers and native people. So, even though the part of the story that focuses on immigration is fictionalized, it’s also true.

Tyranny shows itself in Archaeopteryx in different ways. Migrants are targeted by militiamen who view them in the flat, stereotypical terms of fanaticism. It struck us that Stick is viewed similarly—he is a giant and an unwelcome disturbance in what people would like to think is a just existence. Melodía, with her deformity, avoids people altogether because she can’t bear their scrutiny. This book takes a hard look at the cruelty humans inflict upon one another. It doesn’t seem very optimistic…but Stick keeps acting in optimistic ways. Or is his hand being forced? For a book with this much humor (and love), it’s surprisingly dark.

Yeah, it’s dark. I’ve been on this intellectual bent over the past 10 years or so. “Good looking” people have it much better in our world. If you’re tall and handsome or thin and pretty, your life is by default better. People treat you better. You have more opportunities. People give you more benefit of the doubt.

I’m not at all interested in good looking people. First, looks are racialized: white culture promotes the white as a default of beauty. Second, good looking people generally don’t have to see outside the lines drawn by the status quo. The status quo loves them. Therefore, as a trend, they reify their own power because they have no reason to do otherwise, especially in an age that looks down on empathy as weakness.

I’ve stocked this book with folks who exemplify antitheses of the good looking. I did it on purpose to give the rest of us a peek into their world. I also did it because I’m sick of TV/film/internet culture, which vilifies the ugly and celebrates the beautiful.

Stick, despite being in so many ways a pessimistic person in his thoughts, does do stuff with the understanding that action = outcomes. I assume that’s what you mean by “optimistic.” Stick is a guy who’s suffered for decades, but by the beginning of the story he’s found peace in his life and self-respect. He knows the rest of the world sees him as “other,” but he also knows that he’s an alright person. The story, ultimately, is about how much it takes to erode this feeling of being “alright” with himself.

Does this erosion subvert some of the tropes of detective fiction? Stick is tough in some ways but extremely vulnerable in others.

Detective fiction is all about toughness. Every story is a tug-of-war between the toughness of the dick and the forces seeking to break through that toughness. Marlowe is a perfect example. This book is sort of the opposite: how much does it take to erode Stick’s softness and replace it with a tough view of the world?

At the same time, he is a dude who’s exteriorally hard, but yeah that’s surface. He’s a kind, sensitive giant deep down.

Exsanguinated animals turn up pretty early, so it isn’t much of a spoiler to reveal the existence of chupacabras in Archaeopteryx. Can you discuss the influence of borderland folklore on your imagination?

Sure! How come you already know everything about everything? It always seems like I study something for years and Muskeg already knows it all. Hashtag Smiley Face.

I’m influenced by William A. Calvo-Quirós, who argues that the chupacabra is a manifestation of NAFTA and neoliberalism’s grip on the heart of our southern neighbors. A member of my dissertation committee, Jesse Aleman, turned me on to this writer. The argument is that the chupacabra is a creature of folklore that turned up around the time NAFTA was signed. It’s an organic metaphor for the corporatism, sponsored by the US government, sucking resources, labor, and money from Mexico. I plunked some chupacabras into this story because one of the major themes is the exploitation of people, both documented and un-, environment, and animal world by amoral corporatism. The chupacabra, in other words, makes capitalist injustice manifest in a concrete agent within the story.

Archaeopteryx is only the first installment of a larger story. Can you tell us anything about where we're headed? Or would that reveal too much? (Personally, we're hoping to see more of the vivid supporting cast like Spartacus Rex or Tanis, who claims to be, among other things, an animal theologian.)

It's the first book of a trilogy inspired by Anthony Burgess's Malay trilogy, which tells three related stories with different protagonists. Stick will appear in the next two books, but he won't be the protagonist. However, all three do have the same antagonist. The next one follows Jimmy Xiang, a juggler with the fastest hands in the West, as he undertakes twelve great labors to save Albuquerque from the plague of chupacabras. Tanis, Abby, and other characters will feature in that one, though it swarms with new people, too. The third is about the final showdown between Albuquerque's villains and heroes, led by a magician named Rasputin, a detective with an extraordinary sense of smell, and an orphan with a permanent bloodstain on her foot.


Dan Darling is obsessed with the desert. Born and raised in Albuquerque, New Mexico, he studies the people, the creepy-crawlies, and the geography of the sacred dry spaces. Before earning his MFA in creative writing at the University of New Mexico, he worked as a juggler, a bartender, an IRS agent, and a professional magician. Dan has traveled to over 20 countries and speaks several languages. He’s now an award-winning educator of writing and literature at Normandale College.

His first novel, Archaeopteryx, hit the shelves in November. For information on readings, events, and more, visit dandarling.net.